* I’ve still been fighting that cold this week, and in fact am feeling it worse than ever. I haven’t been doing much of anything this week besides holding down the couch while watching DVR’d episodes of my newest television addiction: “Man vs. Food.” Instead of explaining the concept of the show, I’ll just show you the commercial:

It’s sick, but oddly entertaining. And let me tell ya, it’s just the thing for a chick on a diet to watch. Last night’s episode showed the dude attempting to devour a twelve egg omelet. It was frigging disgusting. I don’t think I’ve eaten anything since.

* Another casualty of the recession, or more specifically of the auto industry crisis:

Emmy Award-winning documentary filmmaker Ken Burns (Unforgivable Blackness: The Rise and Fall of Jack Johnson, The Civil War) will no longer receive financial backing from General Motors, Variety reports. After 22 years, the auto company is ending its support, stating that the current fincial crisis “has forced GM to rein in such spending.” Burns’ final GM-funded project is the six-part series The National Parks: America’s Best Idea, set to air on public television this fall.

* I’ve been tagged by my buddy Robin (Dr. Altman if you’re nasty), child psychiatrist extraordinaire, for a game called 5-5-5. You take the 5th picture out of the 5th folder on your computer and write about it.  Then, you tag 5 people to do the same. So here is the picture: 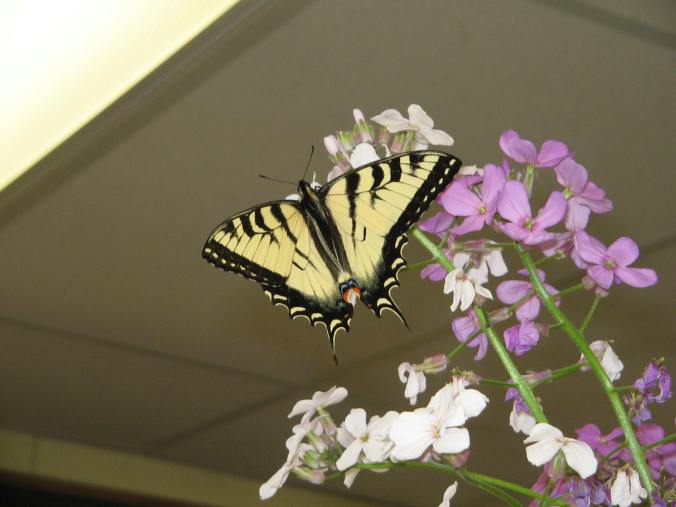 And here is the story behind it:

Last spring, a coworker of mine found this butterfly out in the parking lot behind the store. One of its wings was torn and she was afraid that it would be easy prey for the family of birds that makes its summer home in a nearby tree. She brought the thing inside the store and had another coworker run across the road to pick some wildflowers for it. She (we assumed it was a she) lived inside the store for another day and a half, becoming our temporary mascot. Oddly enough, we kept her there – dead, but prettily preserved – for a few more weeks, until our boss finally tossed her into the trash can because it was upsetting to some of the customers. I suppose it was a little morbid.

The next step is for me to tag five people so they can do the 5-5-5 challenge. Instead I’m officially tagging everyone who reads this and has a blog of their own. Once you’ve posted your photo, leave a link in the comments section. I’d love to see what y’all come up with.