Even though potpourri triggers my asthma

* I’m still recovering from my soujourn to Migraineville. Unfortunately, I travel there quite frequently, but this week’s visit was my worst evah. The pain went away yesterday evening, but I’m still feeling a bit…ugh-y. Thanks for all of your comments of concern and support, as well as for your medicinal suggestions. I’ve got an appointment with my doctor next week, and Imitrex will be on the top o’ my Things To Discuss list.

* Next week I’ll be picking up an extra shift at the store, a graveyard shift. This is bad news for my sleep patterns, but good news for my blog readers, as I should start having more stories of local flavor to relate. (Second shift doesn’t seem to attract the same caliber of customers as third. Go figure.)

* Quite possibly the coolest part of living in my particular neck of the boonies of Maine is that I have access to WKIT 100.3 – Stephen King’s Rock n’ roll Station. Every Thursday night between 11-12 they air Homemade Jam, an hour of programming dedicated to local bands. Last night’s songs included “Slow Motion Michelle” by a guy named Joshua Madore. It is seriously the coolest song I’ve heard in a long time. You can hear it here (and buy it) along with his other stuff.  This is the dude’s MySpace page. (I am not affiliated with the guy in any way. I just have a serious crush on his voice and predict that you will soon, too.)

* Superbowl Sunday is this weekend, which means it’s time for my annual Superbowl prediction. This year, my beloved Patriots aren’t in the show, and since I don’t really know a whole lot about the actual game of football other than that Tom Brady is hot – and since he didn’t play this year anyway – I’m forced to use my “Whose uniform is best?”  method of prediction. So here goes:

IT WILL BE THE STEELERS WHO WIN!!!!

WHY?????
If I stand out in a blizzard to cheer the team on at a rally, they had better darn well win!!! 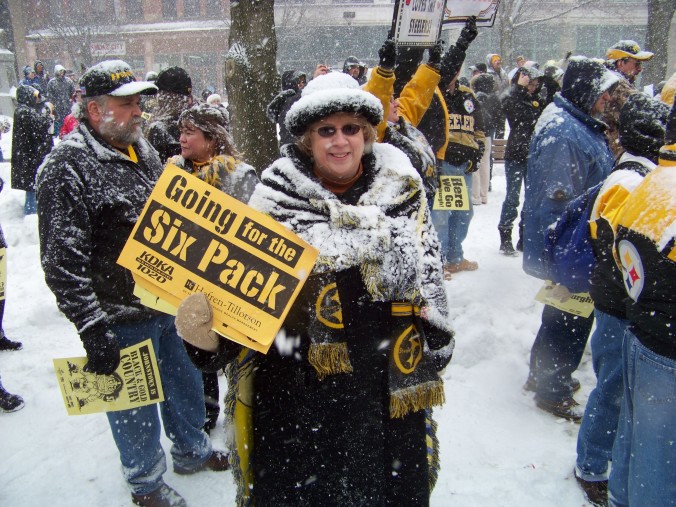