I’ve said it before and I’ll say it again: If you haven’t read 600 Hours Of Edward yet, do it now! Seriously! You’ll thank me for it. Now here’s Craig. (-RJK)

When it comes to the book business and how I comport myself, I’m a man of guiding principles:

1. Write what’s in my heart, not what I calculate to be the quickest route to sales, notoriety, etc.

2. Connect with readers, not other authors.

3. Don’t get in back-and-forths with critics. They have their role, I have mine.

4. Don’t yammer on about sales figures. 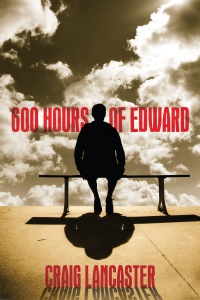 For much of my novel-writing career, still in its adolescence, No. 4 has been easy to honor. There wasn’t much to say. Beyond that, trumpeting one’s sales has generally struck me as unseemly, unless it’s for educational purposes (see J.A. Konrath, who has been transparent about how his life and career have been changed by self-publishing) or some truly remarkable threshold has been met.

I hope the latter is the case here, as I deviate from my self-imposed rigor.

Because of the vagaries of sales numbers—this month’s sales could be eroded by next month’s returns—I won’t know exactly when I cross this threshold, but sometime in the next week, I should reach 100,000 books sold since my first, 600 Hours of Edward, was originally released in October 2009.

In some significant ways, it’s no big deal. I haven’t spent a day on any of the big bestseller lists. My books aren’t released with big multimedia marketing campaigns. I haven’t managed to keep an entire publishing division afloat with any single title. And, hey, it took me four releases in almost four years to accumulate those numbers. (And that doesn’t even get into sales numbers being a poor arbiter of book quality. We’ve all known crap books that sold in crazy quantities and wonderful books that never found an audience.)

On the other hand …

Before 600 Hours came out, I never expected to sell one book, let alone 100,000. In the years since that first release, some remarkable things have happened. I’ve been able to write more books and leave my job, dedicating myself full-time to being a professional author. I find now, at 43 years old, that I am what I dreamed of being back in high school: a self-sustaining, satisfied, working-man author. That was the aim when I started. Not awards (although they’re definitely nice). Not being the toast of the tastemakers (not bloody likely, ever). I just wanted to be a guy who put in the work and made a living.

To mark the occasion and to say thank you, I’m doing some giveaways over at my author page on Facebook. Among the goodies:

Inside The Writers’ Studio

Authors Kristen Tsetsi and R.J. Keller like to make videos when they should be writing. They are Paper Rats.