I met Danielle Bannister in the summer of 2010 during the Belfast Maskers Community Theater production of Picnic. I was (and still am) a novice actor, playing a very small role, while Danielle – an extraordinarily talented theater veteran – tackled the role of Flo Owens, whom I found to be rather one-dimensional on the page. But Danielle brought a depth and humanity to Flo that made her a truly well-rounded, sympathetic character. We worked together again earlier this year in The Vagina Monologues, where Danielle brought the audience to tears with her powerful reading of My Vagina Was My Village, a monologue compiled from the testimonies of Bosnian women subjected to rape camps.

So when I discovered that she had written a novel, I was curious to see how her talent for transforming herself into various characters onstage would translate to making characters come to life on the page. I was not disappointed. Pulled  is a well-crafted YA love story filled with interesting, complex characters and plenty of plot twists. My daughter devoured it in a couple of days and immediately demanded to know when the sequel was coming out. I thought it would be a good idea to ask Danielle about that – and other things – myself…

R.J. Keller: Tell us a little about yourself.

Danielle Bannister: I didn’t plan on being a writer when I grew up.  I wanted to be an actress, on the stage mind you.  Film work, in my naive opinion at the time, was just shy of prostitution.  In retrospect, perhaps I was just bitter that I didn’t have the ‘right look’ for film.  In any event, I got my degree in theatre from the University of Southern Maine.  From there I lived in Chicago for a few years as a starving actor.  And starve I did. Needing to find food, my husband and I moved back to Maine and we haven’t wanted to leave since.  After having a few children, I quit my job as a legal secretary and became a full-time, work from home, homeschooling (read: insane) mama.  It was after about a year later that I discovered writing, and once I did, there was no turning back.  I was hooked.  I’m now pursuing my master’s in Writing and recently finished the Maine Writing Project. 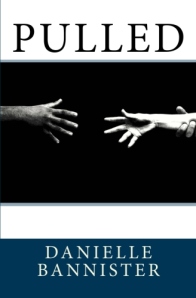 When Naya walks into her first college class, she is instantly consumed by a force pulling her toward a mysterious new classmate, who ends up being cast as the Romeo to her Juliet. This is not the first time they have been 'pulled' together, nor will it be their last.

RJK: Tell us a little about Pulled.

DB: This should be the easiest of the questions to answer, but for me it’s the hardest, in fact, I saved it for last.  I think it’s difficult for a novelist to speak about their work.  It feels like bragging, which I hate.  So, without trying to sound boastful, I’ll say that ‘Pulled’ is, at its heart, a love story.  It’s about those people you meet that have some unexplainable connection.  That thing that goes beyond the traditional thinking of ‘love.’  You kind of have to buy into that possibility when reading this novel, so it won’t be for everyone.

RJK: What was the inspiration behind Pulled?

DB: ‘Pulled,’ I hate to admit, came as a result of a dream.  Well, not even a dream.  It was an image I had just before waking, and it haunted me.  I couldn’t shake the picture of a man and woman hovering in mid-air, in the rain, being electrocuted in front of my old theatre building.  I had never written anything up until that point, but something about this image wouldn’t leave me alone.  Before I even knew I was doing it, I had ten pages written.  It’s funny though, that moment isn’t actually in the book, but the feeling of it is, I think.  The fact that the depiction happened in front of my old theatre building, sort of dictated that my main characters would be theatre majors.

RJK: The question every writer dreads: How much of Naya is you?

DB: If you ask my mom, she IS me!  Unfortunately, my life isn’t nearly as exciting! But seriously, I guess the timid parts of Naya are like me.  Even though I’m an actress, I’m terribly shy before I get to know people. However, there are parts of Naya that are incredibly brave because of the things she’s had to live through.  She’s stronger than I would ever hope to be in the same situations.

"Write NOW! Before the kids find you!"

DB: I think that because I am an actor, my writing tends to be a bit more dramatic. Which could be good or bad!  Something always has to be happening when I write.  I’m always asking myself, ‘What happens next?’  I write a lot of dialogue, perhaps as a result of that too.  Then, there is the luxury of writing scenes you’d love to perform yourself.  There are a lot of those in this book for me, like the ‘closet scene,’ for instance.  When I was writing that scene, I remember physically reacting as I wrote it just to see what if what I was writing could translate onto the page.  I would love to perform that scene.  Now that I think of it, I’d love to do any of them.  Why did I make her so young?  Grrrr.

RJK: Who are your favorite authors? What was the last book you read?

DB: I don’t want to seem sexist, but I really connect more with women writers.  There is something about most (not all) male writers that just doesn’t ring true for me, so I tend to stick with women.  I won’t lie. I loved the Twilight series (not for the writing, but for her ability to hook the reader with the story).  Suzanne Collins, of the ‘Hunger Games’ fame.  Brilliant.  Any good love story (nothing hokey) I’ll read.  Last book I read was ‘The Guernsey Literary and Potato Peel Pie Society’ so I sort of run the gamut in terms of style.

RJK: If you could be any character in fiction, who would it be?

DB: That’s an impossible question to answer.  It would have to be someone strong.  Mentally, not physically.  The courage women have enthralls me.

RJK: Do you have any writing rituals?

DB: Besides locking my kids out the room?  Because I seriously do that.  I installed a lock on my bedroom door so at night when my husband comes home, I’ll make dinner and ask him about his day, but then kindly tell him, “I’m locking myself in our room now” and I’ll make him keep the kids away from me so I can get an hour of writing time in.  That’s why ‘Pulled’ took 3 years to write.  It’s by no means a 3 year worthy novel, but when you have two small children who orbit around you like satellites, it’s hard to find the time to have one coherent thought, let alone a entire string of them. At first, I used to burn a candle, but I got fed up with my kiddos constantly blowing out the flame 2.5 seconds after I struck the match.  The ritual now is: Write NOW! Before the kids find you!

RJK: I hate to do this to you, since I’ve been fielding similar questions for awhile now, but my daughter will never forgive me if I don’t ask: Will there be a sequel to Pulled? If so, when do you expect it to be released?

DB: I’m currently writing the sequel, so yes, there will be at least one more so she can rest easy.  There were several who threatened my life if I didn’t write a sequel!  My own mother and sister were among them!  As for the release date, god, I wish I knew.  I do know I’m making it my new years resolution for 2012 to finish it if that’s helpful!

Danielle will be a guest on the upcoming season 3 premiere of Book Chatter with Stacey Cochran, this Friday, October 7, at 11:00 PM.

Danielle Bannister works from home where she enjoys homeschooling her two small children. She lives with her husband, Jason Bannister, in Searsmont, Maine. She holds a BA in Theatre from the University of Southern Maine and is currently working on a Masters Degree. Pulled is her first novel. She is currently working on the sequel, entitled Pulled Back. Her collection of short stories – entitled Short Shorts – will be available soon through Amazon.